skip to main | skip to sidebar

"Once Jesus perished, dying was virtually all he seemed able to do." 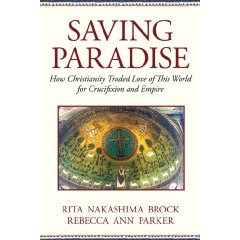 We were over at Wendy and David's house tonight and he passed me a book from his bookshelf. I was so caught by the dust jacket blurb on the book. It made me feel aware again of this awkward seem I'm on between one way of following Jesus and another. The thesis of this book resonates so strongly with me, but I know if wasn't that long ago that it would have been impossible for me to hear their critique.

When Rita Brock and Rebecca Parker began traveling the Mediterranean world in search of art depicting the dead, crucified Jesus, they discovered something that traditional histories of Christianity and Christian art had underplayed or sought to explain away: it took Jesus Christ a thousand years to die.

During their first millennium, Christians filled their sanctuaries with images of Christ as a living presence in a vibrant world. He appears as a shepherd, a teacher, a healer, an enthroned god; he is an infant, a youth, and a bearded elder. But he is never dead. When he appears with the cross, he stands in front of it, serene, resurrected. The world around him is ablaze with beauty. These are images of paradise—paradise in this world, permeated and blessed by the presence of God.

But once Jesus perished, dying was virtually all he seemed able to do.

Saving Paradise offers a fascinating new lens on the history of Christianity, from its first centuries to the present day, and asks how its early vision of beauty evolved into one of torture. In tracing the changes in society and theology that marked the medieval emergence of images of Christ crucified, Saving Paradise exposes the imperial strategies embedded in theologies of redemptive violence and sheds new light on Christianity's turn to holy war. It reveals how the New World, established through Christian conquest and colonization, is haunted by the loss of a spiritual understanding of paradise here and now.

Brock and Parker reconstruct the idea that salvation is paradise in this world and in this life, and they offer a bold new theology for saving paradise. They ground justice and peace for humanity in love for the earth and open a new future for Christianity through a theology of redemptive beauty.
Posted by Tucker FitzGerald at 11:21 PM

Tucker FitzGerald
My wife and I just adopted our daughter, Katelynn Joy. I'm part of a team of 3 people planting ZERA, a different kind of church community in Seattle, WA. I also am Director of Communication at Mercer Island Presbyterian Church